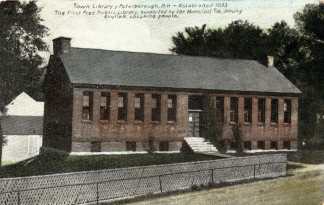 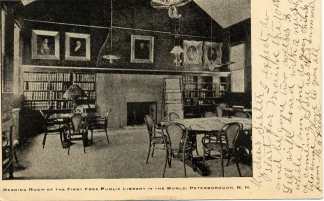 In 2008 the Peterborough Town Library in New Hampshire celebrated the 175th anniversary of the founding of the library. To help celebrate this event the library placed several items on their website. These included an introduction, more on the library's history, and a photo album. They were kind enough to give me one of the pins they produced for the occasion.  The Monadnock Ledger-Transcript compiled a special section in the Tuesday (April 8) issue of the newspaper about the library, its history, and its staff. Thanks to the paper for providing me with a copy of that special section. Nice job. Although American Libraries and AL Direct made note of this special occasion in the history of public libraries, there was little acknowledgement elsewhere. The Public Library Association missed a bet in not taking greater notice of this public library benchmark. As part of my tribute to the occasion, I developed a philatelic exhibit entitled "The Evolution of the American Public Library" which included the envelope and letter below on the first page.

The Peterborough Town Library in New Hampshire was founded at a town meeting on April 9, 1833.  The Boston Public Library which was America's first large public library was not legally established until 1852, nineteen years later.

Jesse H. Shera in Foundations of the Public Library makes the case for the importance of the founding of the Peterborough Town Library.

"The public library is in every sense an institutional descendant of the social library, but in its governmental relationships it represents an innovation. At Salisbury and Lexington municipal support was introduced to strengthen existing social libraries, but at Peterborough, New Hampshire, in 1833, a library was established which from the beginning was truly a public institution and in all its relationships to the community was remarkably like the public library of today.  The significance of the Peterborough Town Library, then, lies less in its primacy than in its modernity."

Sidney Ditzion in Arsenals of a Democratic Culture said this about the establishment of the Peterborough Town Library:

"The account of the establishment of a town library at Peterborough, New Hampshire, is unique in that here we have an instance of what appears to be the spontaneous generation of an entirely new form.  Here, without the stimulus of private donation, without the permission of state legislation, without the semblance of a model in the mother country, a tax-supported town library was born.

The circumstances surrounding the creation of this institution raise an interesting historical question involving local circumstance and group motivation to which no answer has yet been offered.  In January of 1833 a group of farmers and small manufacturers under the leadership of the Rev. Abiel Abbot formed a social library whose shares sold at two dollars and whose annual membership fee was fifty cents.  On April 9 of the same year the town, apparently under the inspiration of the same Rev. Abbot voted to set aside for the purchase of books a portion of the state bank tax which was distributed among New Hampshire towns for library purposes.  This was the way the first American town library to be continuously supported over a period of years was begun."

The person most responsible for the founding of the Peterborough Town Library was Abiel Abbot, a local Unitarian minister.  Abbot was also responsible for founding several other libraries including the Juvenile Library in Peterborough and the Library Company of Peterborough.  In 1965 on the bicentennial of Abbot's birth the New Hampshire State Legislature passed a resolution recognizing Abbot's role in founding the "first free public library in the world supported by taxation".  The resolution also requested that the President of the United States and the Postmaster General issue a postage stamp to commemorate the bicentennial of Abbot's birth. The year 2009 will mark the 150th anniversary of the death of Abiel Abbot.  That would be a great time to issue a postage stamp commemorating American's public libraries. 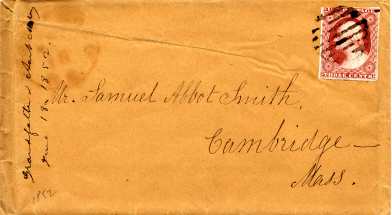 Notation on the envelope by Smith that the letter was from "Grandfather & Aunt Abby".

Letterhead of letter inside the envelope.  Abby Abbot, Smith's aunt, started the letter.

Abiel Abbot's signature at the close of the second part of the letter. 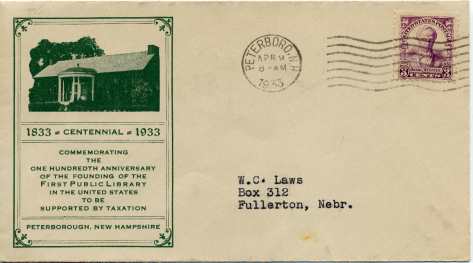 A special event envelope issued to celebrate the centennial of the founding of the Peterborough Town Library in 1933.