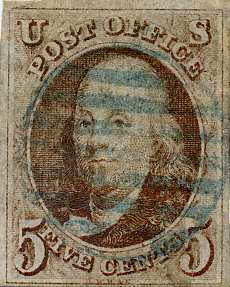 Benjamin Franklin was born on January 17, 1706 in Boston, Massachusetts. Franklin is probably best known in the library community for founding the Library Company of Philadelphia in 1731. It was America's first lending library and can lay claim to being the predecessor of the free public library. For a brief period (Dec. 1733-Mar. 1734) Franklin actually served as the librarian for the Library Company.  He also served as its secretary from 1746 to 1757.  Franklin considered the Library Company to be the "Mother of all N. American Subscription Libraries ....". Franklin appeared on the first United States postage stamp (at left) and has been depicted on more U.S. postage stamps than any other American except George Washington. 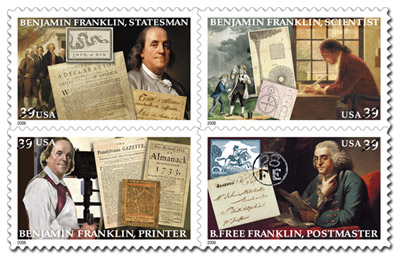 The United States Postal Service  issued a set of four stamps on April 1, 2006 in Philadelphia to honor Franklin.  This image of the four stamps is provided by the USPS. Each stamp is a collage of artifacts representing different aspects and activities of Franklin's life.  Regretfully, none of the stamps shows Franklin's significant interest in libraries.

Franklin is prominently featured on the First Day Cover to the left which was produced by the American Library Association on the occasion of the issuance of the America's Libraries postage stamp on July 13, 1982 at the Association's annual conference in Philadelphia, Pennsylvania. It contains the signatures of Ben Franklin (signed by a Franklin impersonator) and Betty Stone, President of ALA at the time.

In addition to the Library Company of Philadelphia, Franklin also assisted in the establishment and development of other libraries in his lifetime.  These included:

US Library People on Stamps