See Library People on Stamps - An Introduction  for background information.

When libraries and library people are depicted on a postage stamp, it is usually in recognition of something that has little to do with the role of libraries or library people in our society.  Nonetheless, several individuals who have played a role in the development of America's libraries have appeared on postage stamps. 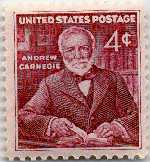 Andrew Carnegie was often referred to as the ‘Patron Saint of Libraries’.  He donated $56,162,622 for the construction of 2509 library buildings throughout the English-speaking parts of the world. More: Andrew Carnegie 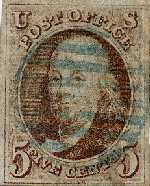 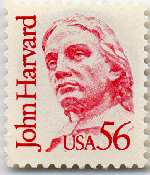 John Harvard Was a Massachusetts clergyman who bequeathed his library of 400 volumes and approximately 780 pounds sterling to the the New College (founded 1636) in Cambridge which was later renamed Harvard College. 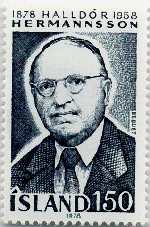 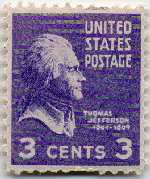 Thomas Jefferson was the third President of the United States, 1801-09. He cataloged and classified material for the University of Virginia Library as well as his own private library, later the nucleus of the Library of Congress. More: Thomas Jefferson 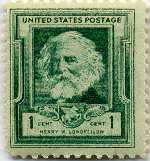 Larry T. Nix, the Library History Buff, on a personalized stamp issued by the United Nations in New York.