2007 is the 25th anniversary  of the issuing of two library stamps by the United States Postal Service.  This First Day Cover contains both stamps and is signed by Betty Stone, ALA President, and Daniel Boorstin, Librarian of Congress. The cover is Cachet Number 1 for ALA. 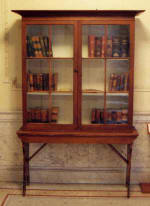 This bedraggled postal card  was mailed on October 21, 1884 by Melvil Dewey in his capacity as Secretary of the American Library Association to Ainsworth Spofford who was the Librarian of Congress and a member of the Executive Board of ALA. Dewey indicates that the Executive Board will meet in Cambridge, MA on Oct. 29, 1884 and will decide on a place and time of the next ALA conference. Click here to find out more about this interesting piece of postal librariana.

This envelope and the letter inside are among the most treasured items in my collection of postal librariana. The significance of this envelope is revealed by the note on its left side.  It reads "Grandfather and Aunt Abbey June 18, 1852".  Samuel Abbot Smith, the person to whom the envelope is addressed was the grandson of Abiel Abbot.  Abiel Abbot was the person most responsible for founding, in 1833, the Peterborough (New Hampshire) Town Library, the first tax supported free public library in America and the world. The year 2008 will mark the 175th anniversary of the founding of this library.  For more on this envelope, Abiel Abbot, and the Peterborough Town Library click here.