In collecting and exhibiting postal librariana, the thing which gives me the most satisfaction is discovering the stories behind individual postal artifacts. The cover (envelope) featured this month led me to the story of how a librarian played an influential role in World War II.  The librarian was Thomas S. Shaw who worked for many years in the Bibliography and Reference Division of the Library of Congress and later taught at the Library School of Louisiana State University. Earlier this year, I came into possession of a large lot of envelopes addressed to Shaw.  Among those envelopes was the one below which was mailed to Shaw at his home address from the White House by G.M.E. on January 26, 1949.

As is obvious, there is nothing special about the envelope itself.  The stamp has even been removed.  Fortunately, for me, a letter was enclosed which is addressed to "Tom" and is signed "George".  It is a personal note in which "George" thanks "Tom" for a gift and let's him know about his upcoming plans to leave the White House. 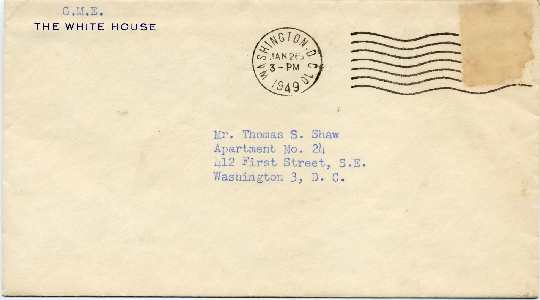 A little snooping around on the Truman Presidential Library Web site helped me identify George as George McKee Elsey, an Administrative Assistant to President Harry S Truman at the time the letter was written.  An Internet search of George McKee Elsey revealed that Elsey had written a memoir entitled An Unplanned Life in 2005.  I obtained a copy of Elsey's book which explained his relationship with Shaw as well as recounting his role as a military advisor to President Franklin Roosevelt during World War II.

In 1941 Elsey was pursuing a career as a historian which is why he relocated to Washington, D.C. Through family connections he contacted Tom Shaw at the Library of Congress. Elsey ended up sharing Shaw's apartment (at Apartment No. 24, 412 First St. S.E. the same address as the one on the envelope) and Shaw facilitated Elsey's research at the Library of Congress.  Not content with doing research when the world was at war, Elsey was able to obtain a commission in the Navy and worked in Naval Intelligence.  In 1942 he was assigned to the White House and worked in the Map Room, the room in the White House from which the American war effort was directed.  Elsey played an important role in the development of wartime policy and in providing Roosevelt and his military advisors with critical background information during World War II.

In his book An Unplanned Life, Elsey tells how his relationship with Shaw assisted him in preparing Roosevelt for his trip to Casablanca in 1943 and for later trips outside the country.

"My friendship with Tom Shaw, my former "landlord" in the Capitol Hill apartment, came into play.  I phoned Tom at the Library of Congress and made an appointment, saying I wanted to do a little research on some African questions.  Tom was no dumbbell; he caught on instantly.  At the library, neither Roosevelt's name nor any travel was ever mentioned.  I returned to the White House with books containing everything Roosevelt might want to know about his destination and more than I needed to write a nine-page essay about the natives, "the Berbers in particular." When the presidential party returned, McCrea said they had read and enjoyed the paper and the books.  I phoned Tom with warm thanks.

Tom and I played this game for all of Roosevelt's later overseas destinations - Cairo, Teheran, Yalta, and Malta.  Since Tom checked out all books in his own name, there was no trace of the White House interest.  Our security was airtight, and we had a little fun." 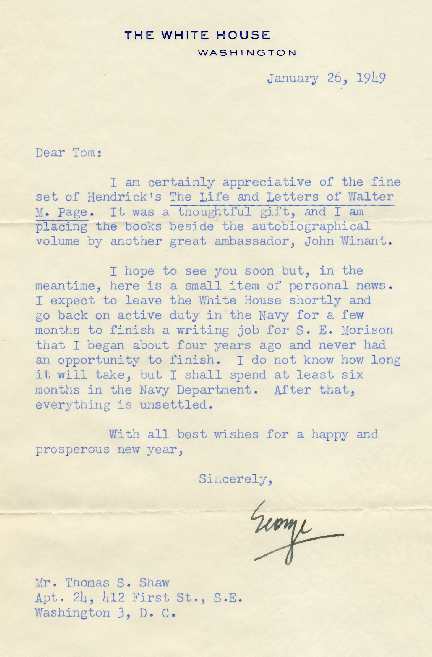 The enclosed letter from Elsey to Shaw.

The other envelopes in the Thomas S. Shaw lot provide a number of clues to Shaw's interesting library career.  But that's another library cover story.