The Destroyed Libraries of Louvain

The most notorious of the two destructions occurred in 1914 during World War I. Phillip A. Metzger has written a good overview of the history of the library including its destruction in 1914 and its rebuilding in 1928.  Metzer describes the library as follows: "At the time of the fire in 1914, estimates place the library collection at 250,000 to 300,000 volumes. An inventory was in progress, and startling rarities were being discovered with regularity. The library was strong in material on the religious struggles of the Low Countries. In addition, there were 350 incunabula, and 950 pieces of manuscripts, some dating to the twelfth century. All this and more disappeared in the flames." P. Delannoy, University of Louvain Librarian, has written a more emotional contemporary description of the library and its destruction. There is a Wikipedia article which includes information about the library's more recent history.

Stamp issued during the period 1915-1920 showing the Library of the University of Louvain before it was destroyed. (Scott Catalogue #118). 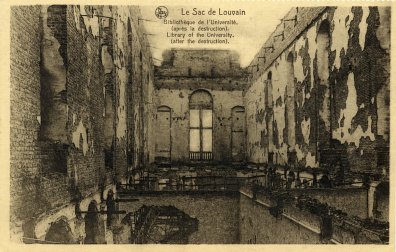 A postcard showing the library after its destruction in 1914.

A new library designed by Architect Whitney Warren was dedicated in 1928.  The new building featured a tall spire and a carillon of 48 bells. This stamp depicts the rebuilt Library of the University of Louvain.  It was issued on Dec. 1, 1928.  It is a semi-postal with the additional funding going for anti-tuberculosis work.  (Scott Catalogue # B83).  In 1940 when Germany overran Belgium, the Library of the University of Louvain was again destroyed. The collection had been rebuilt to include almost 700,000 volumes. 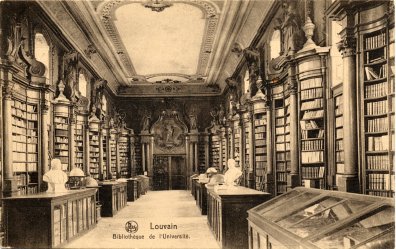 A postcard showing the interior of the rebuilt library that was dedicated in 1928.

During World War II (1943-44) the U.S. Post Office Department issued a series of stamps honoring the countries that were overrun by Germany and Japan.  This is a First Day Cover for the stamp issued to honor Belgium.  The cachet or illustration on the envelope shows the burning of the Library of the University of Louvain.  The person who designed the cachet was Day Lowry who was a prolific designer of cachets.

This stamp which depicts the Library of the University of Louvain was issued on  June 7, 1975 on the 25th anniversary of the Louvain Bible Colloquium.  Professors Gonzgue Ryckmans and Lucien Cerfauz who founded the Colloquium are also depicted. (Scott Catalogue # 931). The library was rebuilt after World War II in accordance with the earlier Warren Whitney design.

Matthew Fishburn has a recently published book (June 2008) entitled Burning Books which provides a look at some of the instances of book burning in our history.  Fishburn's blog provides continuing coverage of this atrocious activity.

A philatelic look at the Burning of the Library of the University of Algiers can be found here.