A Tribute to the Bookmobile 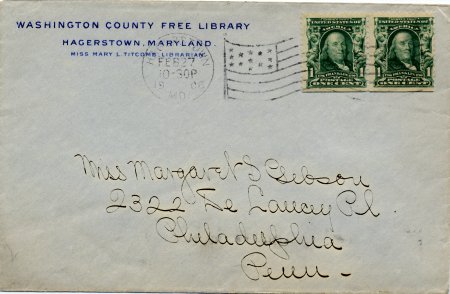 There are few visions of library service that are more inspiring than that of  a bookmobile and its staff providing books to young children. The concept and reality of bookmobile service started in Hagerstown, Maryland in April, 1905 when Mary L. Titcomb, the Librarian of the Washington County Free Library, sent out the first book wagon in the United States from the library.  Titcomb had designed the book wagon which had space for 200 books on the outside of the wagon and storage space for more books on the inside.  The driver of the wagon which was pulled by two horses was the janitor for the library. This envelope was mailed from the Washington County Free Library just 10 months after the book wagon service was initiated.

Preceding bookmobiles as the primary method of library outreach to rural areas were small rotating collections of books called traveling libraries.  To find out more about these libraries click here. 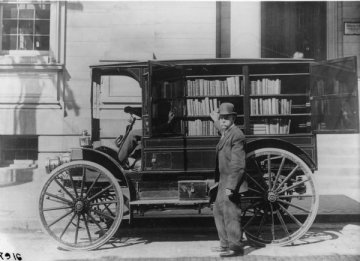 The Washington County Free Library was also one of the first libraries in the United States to use a motorized vehicle as a bookmobile.  This image from the Wisconsin Historical Society's International Harvester Company digital collection shows the Washington County Free Library's first motorized bookmobile.  The image is from the May 1913 issue of Harvester World magazine. More information on this vehicle can be found at the Western Maryland Regional Library's website. 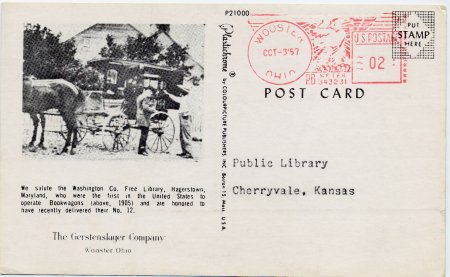 In 1957 the Gerstenslager Co., a major maker of bookmobiles, issued this postcard advertisement which saluted the Washington County Free Library for being the first operator of book wagons in the United States.  The postcard notes that Gerstenslager is honored to have recently delivered bookmobile No. 12 to the Washington County Free Library.  The bookmobile is pictured on the front of the postcard which is shown below.

A brochure in the shape of a bookmobile promoting bookmobile service in Maryland in 1952. 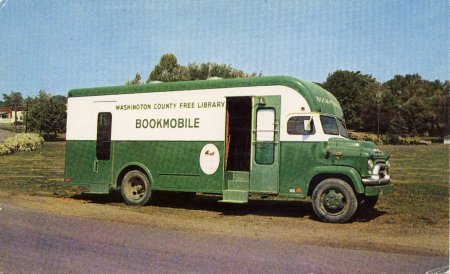 Postcards depicting bookmobiles is one of the categories of library postcards that I collect.

This metal coin commemorates the first bookmobile in Hagerstown, Maryland.  It was issued in 1968 by the Interstate Coin Club. 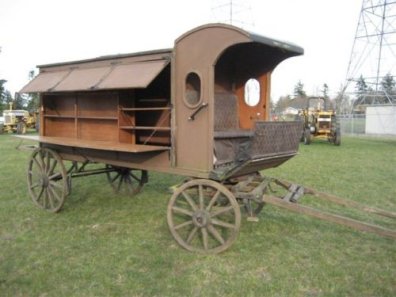 Book wagon found on eBay that was sale for $15,000 or best offer in January, 2011. The book wagon was located in Blaine, Washington.  The seller indicated that it was on display at the Vancouver, British Columbia World Exposition in 1986 and that it dated to the 1920s (although it appears to be earlier than that).  I thought the bookmobile at the Everett, Washington Public Library (shown below) was the oldest bookmobile, but now I think it is this one. I hope it ends up in a good home. 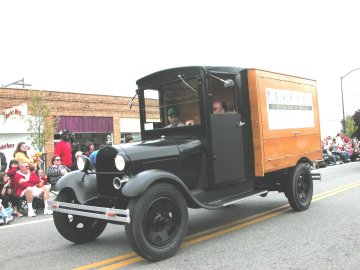 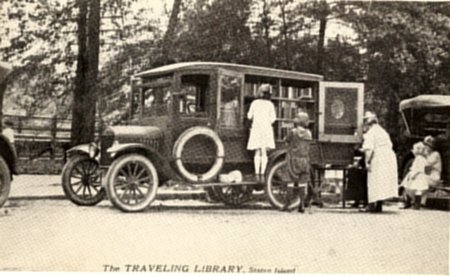 A stereo-view showing a bookmobile serving children in the City of Chicago.

The Cumberland County Library in New Jersey used an illustration of an antique bookmobile on its meter stamps in 1968. 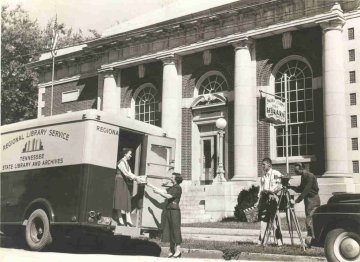 This is a photograph of the Blue Grass Regional Library bookmobile in front of the Maury County (Tennessee) Public Library, probably in the late 1950s or early 1960s. Note that the bookmobile and the two women are being filmed.  Early in my library career I worked for the Clinch Powell Regional Library in Tennessee and on occasion I had the opportunity to drive a bookmobile with similar signage.  The regional libraries in Tennessee are administered by the Tennessee State Library and Archives. The photograph is courtesy of the Maury County Public Library. 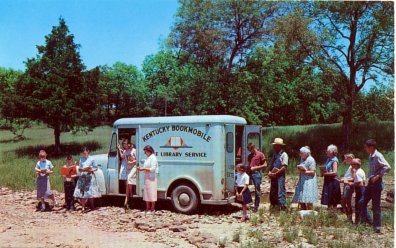 The printed message on the back of this postcards says in part: "One of Kentucky's 98 bookmobiles which give service to young and old in remote corners of the state." The postcard was produced by the Friends of Kentucky Libraries.  The postcard was used to promote the passage of a referendum to establish free public library service in Hardin County, KY in 1958. The Hardin County Public Library was founded in 1958 so the referendum must have passed. The public library still operates a bookmobile. 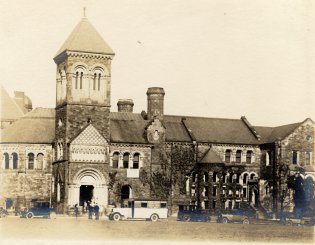 This postcard shows the bookmobile of the Monroe County Traveling Library in Rochester, New York sometime in the 1920s.  An enlargement of the bookmobile is shown below. 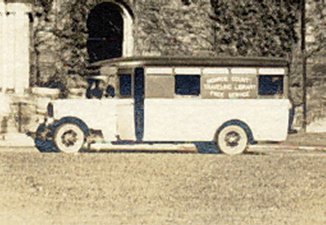 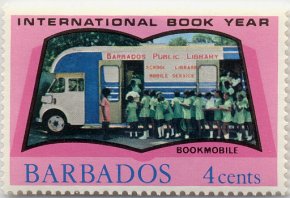 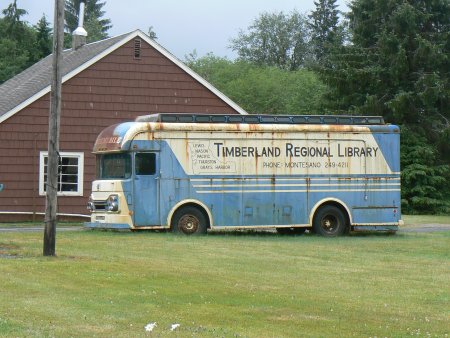 Where bookmobiles go to die.  I came across this "retired" bookmobile while vacationing in Washington state.  One can only imagine the the impact that it had on the lives of children and adults before it gave up the ghost.

The Wisconsin Library Heritage Center has a bookmobile page on its website.

Students at the Palmer School of Library and Information Science, Long Island, have created a website devoted to the bookmobile.

For more images of bookmobiles go to the Flikr Bookmobile Group.