Although the current National Library week originated in 1958, the idea of a week to promote libraries was not new. In fact the Publicity Committee of the American Library Association recommended such a week in 1922 at the Detroit Conference of the American Library Association.  The Publicity Committee suggested April, 1923 as a possible time to initiate a Library Week. The recommendation of the Publicity Committee was prompted by the success of Indiana Library Week which occurred the week of April 23-29, 1922.  Missouri had also implemented a Book Week in February of that year. Children's Book Week had begun in 1919 based on a proposal as early as early as 1913. Toledo, Ohio promoted a Library Week in 1916. Hawaii promoted what it called National Library Week in in the early 1940s. Louisiana and California were other states that celebrated a Library Week prior to the current National Library Week. The coverage of presentations relating to a possible Library Week at the 1922 Detroit Conference can be found on pages 133 to 139 of the 1922 volume of the Bulletin of the American Library Association which is located on Google Books. 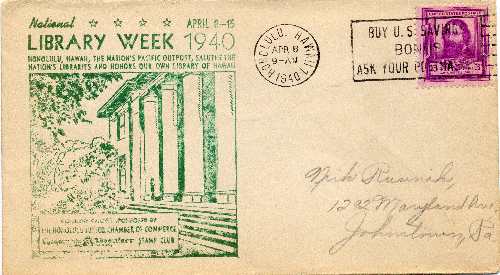 The caption reads in part: The Nation's Pacific Outpost Salutes the Nation's Libraries and Honors Our Own Library of Hawaii. The special envelope with cachet was sponsored by the Honolulu Junior Chamber of Commerce and the Honolulu Advertiser Stamp Club. A similar envelope was produced for 1941.

A theme was selected each year to celebrate National Library Week.  Metered mail provided a great vehicle for promoting the theme.  Meter postage stamps were first authorized by the U.S. Post Office in 1920.  Meter slogans were first used in 1929.  The Pitney Bowes Postage Meter Company held a virtual monopoly on meter stamps for fifty years.

The 1960 National Library Week slogan on this meter stamp is "For a Better Read, Better Informed America". However, "Open wonderful new worlds...wake up and read" was also used.

The meter slogan on this 1963 postal card doesn't include the theme statement.

The 1970 NLW theme "Reading is for everybody" was used on this envelope in 1976 to celebrate NLW.  The actual theme for 1976 was "Information Power at the Library? At the Library".

The 1972 NLW theme was "Reading makes the world go round; Books bring people together".

The 1974 NLW theme was "Grow with books; Get it all together"

The 1979 NLW theme was "The Library is Filled with Success Stories".

The 1981 NLW theme was "America's library has your number".

The official theme for 1983 was "Go for it! Use your library".  The "Look to your library" slogan was used for this meter stamp.

The 1984 NLW theme was "Knowledge is RealPower". 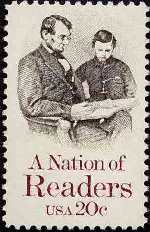 The 1985 theme for NLW was "A Nation of Readers".  Thanks to the efforts of the Center for the Book at the Library of Congress, the USPS issued this stamp in 1984.

The 1989 NLW theme was "Ask a Professional. Ask a Librarian."

The 1992 NLW theme was "Your Right to Know: Librarians Make it Happen".

The 2008 NLW theme was "Join the circle of knowledge @ your library".

The 2010 NLW theme was " Communities thrive @ your library". 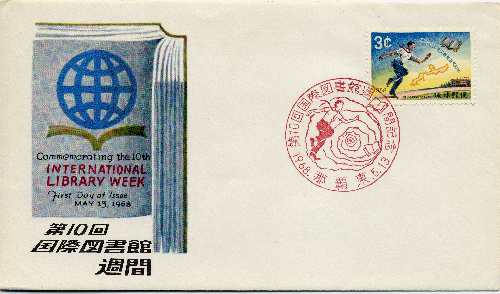 The Ryukyu Islands issued a stamp in 1968 to commemorate the 10th anniversary of International Library Week.  At that time the Ryukyus were under the semi-autonomous administration of the United States.  Control of the islands reverted to Japan in 1972.  The "international" aspect refers to the fact that there were both American military libraries and Japanese village libraries on the islands.  The theme for library week was the same as NLW in the states - "Be all you can be --- Read".