Covers (envelopes) have been used to promote products, services, and businesses from the beginning of their use in the postal system in America.  This has certainly been the case with vendors and organizations doing business with libraries as well as libraries themselves. 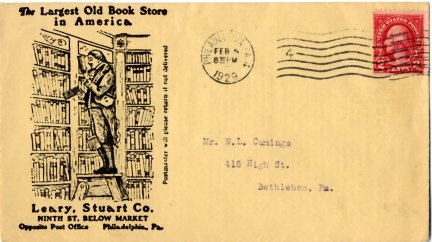 Although this cover was not mailed to or from a library, it is a great example of an advertising cover with a library theme. It was mailed by Leary's Book Store in Philadelphia in 1929. Leary's promoted itself as "The Largest Old Book Store in America". The illustration on the envelope of a man on a ladder in front of book shelves was used on the sign in front of the bookstore. It is based on the painting entitled "The Bookworm" by Carl Spitzweg that is now at the Milwaukee Public Library. Leary's Book Store closed in 1968 after a century of being in business. The sign in front of the bookstore was purchased by Fred Ruffner, owner of the Gale Research Company. 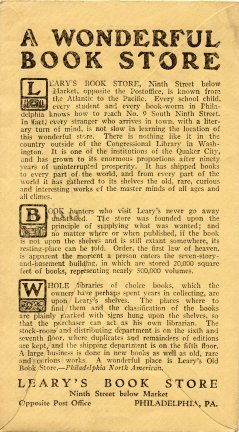 The reverse of the cover has an extensive promotional message. Some excerpts read:

"There is nothing like it in the country outside of the Congressional Library in Washington."

"Order, the first law of heaven, is apparent the moment a person enters the seven-story-and-basement building, in which are stored 20,000 square feet of books, representing nearly 500,000 volumes."